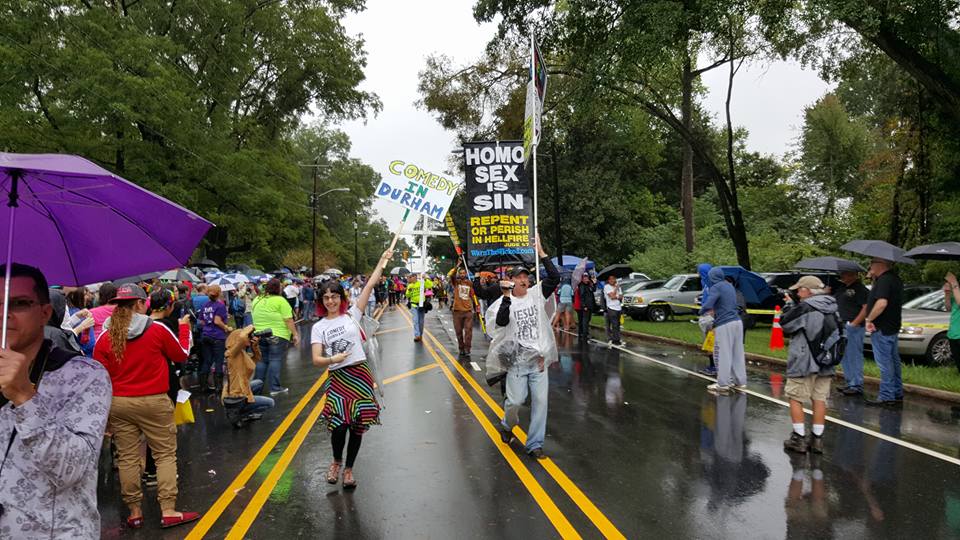 Some of you may have seen me at Pride this year. I was in the back….waaaay back. Where the people holding the “gay people going to hell” type signs are.

Now and then you wearily go to a party and end up having the greatest time ever.

That’s what happened to my boyfriend and myself at this year’s gay pride parade in Durham. It rained (as it does nearly every year at pride) and we were tired from staying up late the night before. But he was supposed to march with a group, and I was marching alone to promote comedy. We knew we would regret not going.

I already had my sign from CenterFest, a rainbow skirt, and ComedyDurham.com T-Shirt.

So what was I supposed to do?  NOT mock the shitty hate people? (see pictures)

What you don’t see in the pictures, is my dear sweet boyfriend mooning them over and over. He would show his butt, pull up his pants, run a little bit in front of them, show his butt, repeat.

The signs gave me an idea for next year. I’m going to maybe make signs specifically to mock the hate groups at pride.  Let me know if you have any ideas for signs.