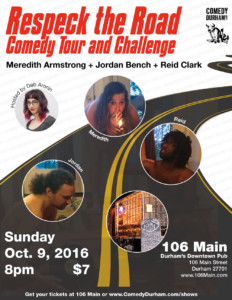 Respect the Road Comedy Tour and Challenge is coming our way Sunday, October 9 at 8PM. at 106 Main in Durham. Tickets just $7 bucks!

Comedian Reid Clark, Meredith Armstrong, and Jordan Bench are three comedians traveling across the country documenting their struggles and participating in challenges on the road to amuse and amaze you.

They will film themselves doing things such as performing without pants, hitchhiking all dangerous like, and inverting all gatorades in a Wal-Mart.

Also you can help Reid get a new testicle.

So who are the comics?

Meredith: A style of comedy that will simultaneously delight and disgust. Her experience both as your favorite neighborhood slut (her words) and traveling ER nurse have provided her with a unique and interesting perspective on human interactions. Meredith will take you on a journey that will make you laugh, cry, and probably do that thing where you wince and groan at the same time.

Jordan Bench: Originally from Sammamish, WA but now a transplant in Wilmington, NC. He’s hosted at the Cape Fear Comedy Festival two years in a row and has opened for comedians like Eddie Efft and Ron Funches. If you enjoy comedy that will make you question why you left the house then Jordan might be a comic for you. He dances like everyone is watching.

Reid Clark: the HEADLINER. A five year comedian with appearances all across the US. He’s worked with Fortune Feistier, Alonzo Bodden, Neal Brennan, and Trevor Noah at Dead Crow Comedy Room in Wilmington, NC. He was a joke writer for Orlando Jones. And written, directed and performed for music videos that have been in festivals and Funny or Die. Also a bunch of other really great stuff.

Reid gave up his right testicle for comedy. No, really.

His comedy has been described as dark, blue, and political, with elements of musicality and improvisation.

Once again this is at 106 Main in Durham. That’s both the location and the name of the bar. Tickets are $7. Check out our shows page to get tickets. Or buy them from Deb (me) in person! OR go check out 106 main in Durham and buy one directly from them.