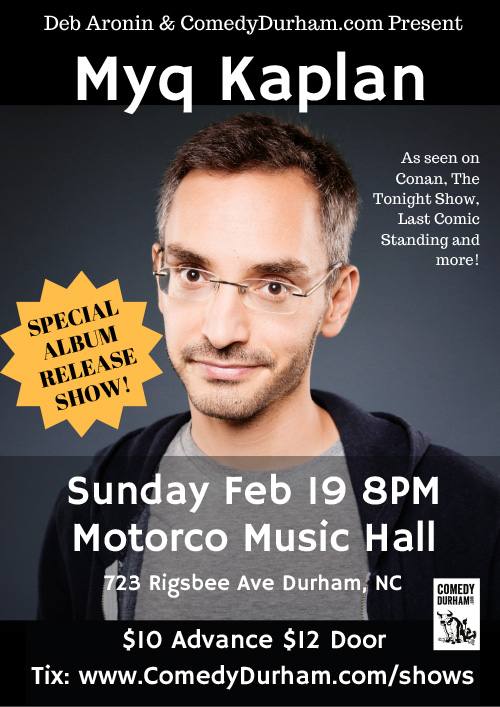 He completely KILLED last time, make sure to make it to this encore event! Ok, not an encore six months later, but you’ll love it.

MYQ KAPLAN announces the release of his 4th comedy album NO KIDDING out FEBRUARY 17 on ASPECIALTHING RECORDS. On his follow up to ‘Small, Dork and Handsome’, Myq unleashes some spot-on impressions, the wittiest of wordplay and thoughts on drinking, sex, family, money, drugs, Nicolas Cage, psychic predictions, kids and back to drugs again. While ‘No Kidding’ is pure Myq’s comedic style, fans may notice an evolution in that style as he ventures into more long-form comedy. As the Boston Globe notes in a recent review, “his act isn’t just a series of one-liners anymore.” Pre-orders available now and February album release shows announced.

Myq Kaplan is a comedian who already has three outstanding comedy releases including his debut album ‘Vegan Mind Meld’ which was one of iTunes’ Top 10 Comedy Albums of the Year. On TV, he has made appearances on the Tonight Show, Conan, the Late Show with David Letterman, Late Night with Seth Meyers, his own half-hour Comedy Central Presents special and his special “Small, Dork, and Handsome” is available on Netflix. He’s also appeared on America’s Got Talent and was a finalist on Last Comic Standing. Myq hosts the podcast “Hang Out With Me” where he hangs out and talks with humans in ways that are meaningful, fun, both, or neither.