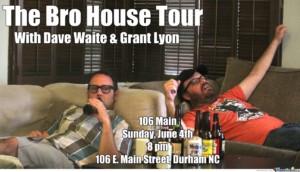 Great seeing you at the Dave Stone show!  But there’s no time to lose.  Mark those calendars for June 4, we’re getting ready for two roommates slinging jokes all across the United States.

“I’m sort of the Ben Stiller, funny straight man, if you will, and Dave is sort of this dirtbag with a heart of gold, and I think that contrast plays off each other very well.”  So says Grant Lyon, the L.A. based comedian touring with his good friend and roommate, Dave Waite.  The two have put together The Bro House Tour and will be performing at 106 Main in Durham, NC on Sunday, June 4.   Both Dave and Grant have won the Laughing Skull Comedy Festival in Atlanta in 2012 and 2014 respectively. Both have appeared on the syndicated radio program “The Bob and Tom Show” and can be heard on Sirius/XM Satellite Radio.  And they have done so with their own distinctive voices. Dave can easily be described as a charismatic oddball with the most charming of rants and peculiar look at life. And Grant, as described by the San Francisco Weekly is “a hilariously sharp observer, not one of those white guy tired, white-guy bellyachers.”

Dave also began One Year Dave, a project where he allows the world to tell him what to do for 365 days.  Every Tuesday he posts a list of things he can do that week and let’s his fans vote on what that thing will be. “The motivation was to do anything instead of nothing.” Says Dave, “There’s so much free time as a comedian. It’s so easy to become obsessed with wasting your life, all the mistakes you’ve made, ‘Where’s my career going?’ all that sort of stuff. ….I’ve always liked books where somebody commits to doing something for an entire year.  I wanted to be accountable in some way. That’s why I made it so people could vote every week. …I decided to let the internet be my boss.”

The two rising stars are building up their merits quickly.  Dave Waite debuted on late night television with his performance on Late Night with Jimmy Fallon. Grant Lyon is a contributing writer for the Huffington Post and “Interview Date,” the short film his wrote and starred in, was eligible for an Academy  Award in 2013.

Dave Waite and Grant Lyon will be performing at 106 Main in Durham on Sunday, June 4 at 8PM. Tickets are $10 and can be purchased at ComedyDurham.com/events. Hosted by Durham comedian Deb Aronin.

Get your tickets here!